PSPP can perform T-tests and ANOVA test for comparing means. T-test is a statistical hypothesis test in which the test statistic follows a Student’s t distribution if the null hypothesis is true. The unpaired, or “independent samples” t-test is used when two separate independent and identically distributed samples are obtained, one from each of the two populations being compared. ANOVA test is a statistical test of whether the means of several groups are all equal, and therefore generalizes Student’s two-sample t-test to more than two groups.

The T-TEST procedure in PSPP operates in one of three modes:

To compute one sample T-test go to Analyze – Compare Means – One Sample T-test.

Independent Samples T test tests the mean difference between two groups. Groups are defined by the independent variable which determines to which group the samples belong.

To compute independent samples T-test go to Analyze – Compare Means – Independent Samples T-test. Select test variable (in our case A4 from SJM2002/2 data set – ”Homosexuals should have the freedom to organize life according to their own desires.”; values 8 – “don’t know” were recoded to missing values first) and groups variable (in our case gender).

By clicking to Define Groups define values for first and values for second group. 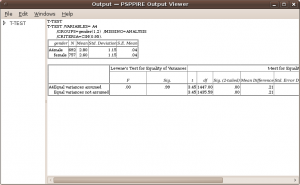 The results show, that there is statistically significant difference between male and female; on average female more agree that homosexuals should have the freedom to organize life according to their own desires than male (please note that lower value in A4 means stronger agreement).

This mode is used when repeated measures have been taken from the same samples. This type of analysis is useful in panel research or experimental research, for instance in deliberative polling, where people are first asked questions about some political issues, then they are invited to inform about and discuss those issues with experts and among them, and at the end, they are asked the same questions as before. With paired samples T-test we can then measure their opinion change, influenced by information and discussion.

One-way ANOVA procedure performs a one-way analysis of variance of variables factored by a single independent variable. It is used to compare the means of a population divided into more than two groups.

In the given example we are trying to test the hypothesis that people in urban areas use internet more than people in villages. We used SJM2002/2 data set variables area and internet. In variable area a ”single farm” was recoded to ”village” and ”don’t know” in both variables to system missing value.

Results show that there is statistical difference of internet use among area of living.