Currently there are two tests available:

The Chi-Square test produces a chi-square statistic for the differences between the expected and observed frequencies of the categories of a variable. Optionally, a range of values may appear after the variable list. If a range is given, then non integer values are truncated, and values outside the specified range are excluded from the analysis.

To do Chi-Square test go to Analyze – Non-Parametric Statistics – Chi-Square.

If a single value appears after the variable list, then that value is used as the threshold to partition the observed values. Values less than or equal to the threshold value form the first category. Values greater than the threshold form the second category.

If two values appear after the variable list, then they will be used as the values which a variable must take to be in the respective category. Cases for which a variable takes a value equal to neither of the specified values, take no part in the test for that variable.

If no values appear, then the variable must assume dichotomous values. If more than two distinct, non-missing values for a variable under test are encountered then an error occurs.

PSPP uses a very precise approximation to the gamma function to compute the binomial significance. Thus, exact results are reported even for very large sample sizes.

To do Chi-Square test go to Analyze – Non-Parametric Statistics – Binominal. 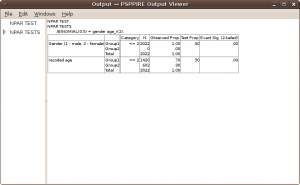